Venezuela is a country that is strongly influenced by Spanish culture. In Venezuela there is a large spread of wealth that can be seen throughout Caracas and other large cities. There is a widespread of Colonial architecture found in the small cities and wealthier parts of large cities.

Venezuela is located in the upper part of South America. Its neighbouring countries are Columbia, Guyana and Brazil.

The capital city is Caracas and is located on the northern side of Venezuela. 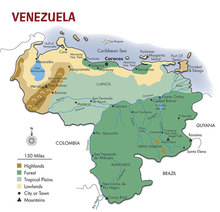 Simon Bolivar:Simon was once a military political leader and had a huge part in the Hispanic America's successful struggle for independence from the Spanish Empire, and is today considered one of the most influential politicians in the history of the Americans.

Alejandro Chataing: Alejandro was an important Venezuelan architect. Chataing was known as the "great constructor of the regime of Cipriano Castro." He was a prolific architect who helped give Caracas a new face.